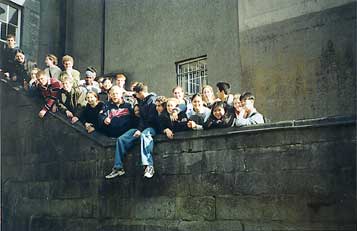 After four formal concerts, and the premiere of student-composer Julia Carey’s (III) piece The Lake Isle of Innisfree the Milton Academy Chamber Singers and Chamber Orchestra returned from a ten-day tour of Ireland and England.

A pre-tour concert in the Ruth King Theatre. at Milton on March 10 launched the 10 days. This concert marked the World Premiere of The Lake Isle of Innisfree written for the tour by Julia Carey, Class III. The work is a setting of a text by the Irish writer, William Butler Yeats and features Julia playing the orchestral reduction at the piano. Milton fans will hear the full orchestral score at next year’s Winter Concert.

That same week the Chamber Orchestra performed at the Massachusetts Music Educators Annual Conference in Danvers Massachusetts; Milton was the only high school orchestra asked to perform.

In addition to four formal concerts, the chamber singers performed for the dedication of a plaque in the Swiss Life building. Lord Hasseltine, former Deputy Prime Minister of England under Margaret Thatcher, dedicated the plaque. The Chamber Singers sang two selections, A Dark Eyed Sailor of Ralph Vaughan Williams and an arrangement of the folk song Shenandoaharranged by Ted Whalen. The chorus was presented with a statue of a “Liver Bird” the original of which sits on the top of one of the main buildings in Liverpool.

The first formal concert of the tour was a Lord Mayor’s Charity Concert in the Chester town hall. The groups performed for a full house of attendees including the Lord Mayor of Chester and the Madame Sheriff. The orchestra performed the Schubert Overture in the Italian Style two movements of the Handel Harp Concerto in Bb, with Jennifer Doorly as soloist, the finale from the Mozart Clarinet Concerto with Rebecca Doggett as soloist and the Prokovieff Overture on Jewish Themes. The Chamber Singers opened their half of the program with two movements from the Vivaldi Gloria. They also sang several selections from the Renaissance including two works of William Byrd, Sacerdotes Domini and Ave Verum Corpus. Lord Mayors Concerts are charity events sponsored by the Mayor of Chester. The proceeds for the concert were donated to the England 911 fund to help those who were effected by the events of September 11.

The group’s second concert was performed to a full house at the large Anglican church in town, St. Canice’s Cathedral. The performance was shared that evening with a Girl’s school choir and string quartet from Kilkenny. The third concert was performed for a full house in St. Flanagan’s Cathedral in the small town of Killaloe. The chamber singers and chamber orchestra concluded their remarkable tour with a concert in the Shaw room at the National Gallery of Art.

The groups’ tours of England and Ireland also included: a tour of the various Beatles sights; Cashel Mont; a walking tour of Kilkenny which included a stop at the Black Abbey, one of the oldest churches in Ireland; tours of Killarney, the Muckross House, the Cliffs of Nor on the coast of Ireland and the Burren area of Ireland; and concluded with free time for sightseeing and shopping in Dublin.