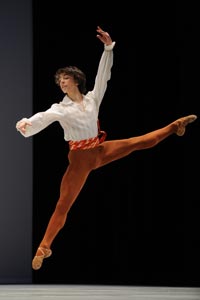 When Dylan Tedaldi ’09 left for Switzerland in January, he had no idea what to expect.  When he returned to Milton one week later, he was considered to be one of the top three young dancers in the world.

Last fall, Dylan was chosen among just 71 dancers—20 of them boys—to participate in the 36th Annual Prix de Lausanne competition in Lausanne, Switzerland.  The Prix de Lausanne is an international dance competition reserved for young student dancers aiming to pursue a professional career in dancing.  Performing Arts faculty member Kelli Edwards remarks, “Of all the international ballet competitions, this prize is probably the most coveted.  Just to be selected to compete is an honor.”
The Prix’s artistic committee chose the 71 dancers out of a pool of applicants from as many as 22 nations.  According to the Prix de Lausanne’s Web site, Dylan was not only chosen to participate due to his achievements to date, but for his “advanced technical skills” and his potential to “succeed within a dancing career.”  The competition, which ran from January 29 through February 2, had both classical (ballet) and contemporary elements; students learned dances choreographed by some of the world’s most talented dancers and choreographers.

Throughout the competition, students spent their days in lessons and workshops, meeting with members of the jury, working with renowned dance professionals, and sharing their experiences with competitors from all over the world.  “It was incredible to be learning and dancing with people who study in such different places and do things in such different ways,” Dylan says.  “It was difficult to gauge where you stood among them, because you couldn’t compare your techniques with theirs.  The language barrier was a little difficult—there were translators everywhere—and the award ceremony was in French, so when they announced my name, I didn’t even know what I’d won.  I just smiled and bowed.”

The top prizewinners are granted scholarships to attend a Prix-partnered dance school or professional dance company of their choice for one year.  Dylan is considering both the San Francisco Ballet and the Royal Ballet of London.

Though trained primarily in classical dance, Dylan admits to preferring the contemporary aspect of the competition: “Contemporary is fun because it’s newer to me.  I also found it to be easier, because I really had to put my emotions into it.  I was performing a particularly angry piece.  That dance was probably the most physically demanding thing I’ve ever done in my life.  I can’t begin to describe how exhausted I was when I was finished, but it was a good kind of exhausted—draining and exhilarating at the same time.”

Dylan’s Milton dance career began in the seventh grade when he first choreographed for and performed in the Winter Dance Concert; he has created and performed dance numbers in the Concert ever since.  Last year Dylan played the role of Mike—a dancer trying to make it big—in Milton’s production of the Broadway musical A Chorus Line.

Outside of Milton, Dylan has been a student of the Boston Ballet since he was nine years old and has spent every summer since then practicing and refining his skills at either the School of American Ballet; the San Francisco Ballet; or Stagedoor Manor, a performing arts camp in upstate New York.  Some of his professional performances have included the role of Fritz in Boston Ballet’s production of the Nutcracker and a dancing role in the film The Game Plan.