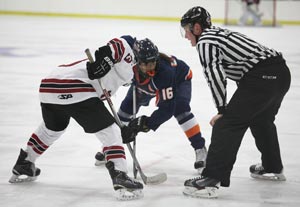 The annual Flood-Marr Holiday Hockey Tournament is named for Dick “Lefty” Marr and his college roommate, longtime friend and rival hockey coach Dick Flood. Lefty Marr, who just passed away on November 11, was a member of the Milton faculty from 1957 until 1980, during which time he headed Forbes House and coached the boys’ hockey team. After leaving Milton, Lefty went on to head Aspen Country Day School in Colorado; he then taught and coached at Tabor Academy for 19 years. This year’s tournament, the 52nd annual, will include a tribute to Lefty and a moment of silence in his honor, preceding the puck drop on Saturday morning. This three-day competition for boys’ teams includes Nobles, Hotchkiss, Andover, Westminster, Deerfield, Kimball Union, Salisbury and Milton.

On the same weekend, the top girls’ talent takes to the ice at Milton and Nobles to compete in the 36th Annual Harrington Invitational. Milton will battle Nobles, Lawrence, St. Paul’s, St. Mark’s, BB&N, Westminster and Williston-Northampton.