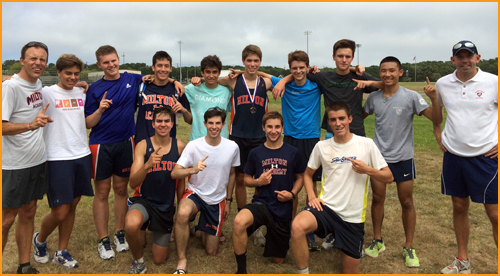 The Milton Academy boys’ cross country team began their 2014 season with an impressive win at the Martha’s Vineyard Regional High School Invitational. This is the team’s fifth trip to the island to compete in the invitational, and it is their first win. The race included 13 schools from throughout Massachusetts.

Team captain Connor James (I) led Milton’s squad and finished second overall in the race out of approximately 100 racers. Next for the Mustangs was Chadd Yuan (II) in ninth followed by Trevor Atkeson (II) in 15th, Will Stikeleather (II) in 24th, Paul Housey (II) in 31st, David Mercier (I) in 49th, and Teddy Beaudoin (III) in 56th. The team improved their average time by nearly thirty seconds from 2013, even with one of their top runners still recovering from a recent illness. Will Stikeleather showed the most improvement, reducing his time by 1:54 for the 5K.

The results in the junior varsity race were equally impressive. Sam Brigham (II) led the way for the Mustangs, crossing the line in 12th place overall, which would have earned him a strong finish in the varsity race. Next was captain Rick Dionne (I) in 16th, Jamie Little (I) in 20th, Sam Rochelle (II) in 32nd, Steve Char (I) in 49th, Tyler Piazza (III) in 53rd, Davis Tantillo (I) in 59th, and Henry Westerman (III) in 79th. Davis Tantillo lowered his time 1:22 from a year earlier.

Milton edged out their ISL rivals, Belmont Hill, by five points for the win. Shepherd Hill, Whitman Hanson and Barnstable rounded out the top five teams.

Attending the MVRHS Invitational has become a fun team tradition. The day-long journey includes a ferry ride, a trip to the beach, a pizza party in Memorial Park, and a walk through historic Oak Bluffs for some shopping and ice cream.