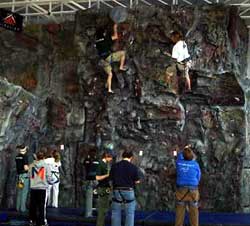 During the two-hour morning qualifying round, climbers ascended as many marked routes as possible. Each route carried a score; a fall during a climb (hanging suspended from the wall, anchored by a belayer) or use of a non-marked handhold, earned no points. Climbers with the highest scores after round one qualified for the finals in the afternoon.

Milton is fortunate to have two Nicros Climbing walls in the gym, one on either side as you enter. The darker wall, the more difficult one to climb, is called an ArtWall because it is meant to look and feel like real rock. The ArtWall is molded from real cliffs near the Nicros’s headquarters; it looks and feels a realistic because of the “natural features”. The second wall, which is white, was constructed on a timber frame from plywood and cement. Both walls have modular hand and footholds, which can be moved.

“Because you can move holds around the wall, you can essentially have an infinite number of hand and foot hold configurations, explains Matt Bingham, Milton’s outdoor program director. “We recently “renovated” the walls by removing all the holds from the white wall and then hired the Rhode Island Rock Gym to set new routes; the white wall is now 100 percent different from what it was the week before the competition.”

Routes, or paths up the side of the wall, are marked by different colored pieces of tape. The starting hold is marked with a V. Each route has a point value; these ratings correspond with the Yosemite Decimal System which rates rock climbs in America. The system starts with 5.0 as the easiest and 5.15 as the hardest; the best Milton students can climb about 5.10 or 5.11.

During the finals round, all the climbers are put into “isolation” so they cannot watch the previous climber. Each climber ascends the marked route; the highest climber wins. In the beginner group, Jon Brestoff (I) and Thalia Beaty (Dana Hall) tied for first and Jesse Drummond (I) placed second. In the intermediate category, John Dennison (II) and Meredith Carpenter (Nobles) tied for first and Hunter Stone (I) took second place. In the advanced group Tom Myers (I) finished first with Colin Flaherty (II) a close second and Alex Seitz (I) in third.

This year the top three place winners in each category took home prizes. The prizes were donated to the Milton Outdoor Club by various sponsors including Black Diamond, The Boston Rock Gym, Wilderness House, and EMS. Prizes this year included a climbing harness, several chalk-bags, and gift certificates. Other “prizes” are raffled during the competition.