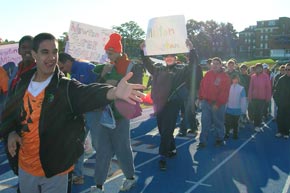 The Special Olympics soccer tournament is a day of friendly competition, community service and camaraderie that Milton Academy hosts every fall. It took place on October 15 and was a great success, due to the hard work of many.

As part of the opening ceremonies, Steve Feldman of the math department made a skydive onto Stokinger Field along with three other members of his national championship winning skydiving team, Mass Defiance. During his jump, Steve wore an Explorer data recorder and accelerometer newly acquired by Milton’s science department; Class IV students will use the data recorded to study the physics of freefall acceleration.

Athletes competed over the course of the day in two categories: one division is made up entirely of Special Olympians, and the second—called unified, or partnered division—hosted teams which included non-disabled athletes as well. One such team was the Milton Mustangs, which includes Class I students Ivan Kozyryev and Rio Cleaver.

The Academy has hosted various Special Olympics events for over twenty years, including basketball tournaments in the winter and track events in the spring. Milton’s Community Service Board members, together with Special Olympics staff, organized all aspects of planning and executing Sunday’s events.