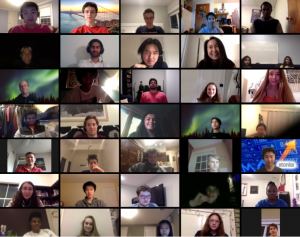 Eighteen teams ranging in size from one to seven students came together via Zoom to participate in MiltonHacks II, an intramural, student-led hackathon. The hackathon took place over 12 hours on May 24, during which students from different schools built projects that were judged by a panel of Milton alumni. Teams competed in six categories: Most Addictive Game, Most Educational, Most Technical, Most Scalable, Best UX/UI, Best Novice Hack, and Best Overall Hack.

Most Addictive Game went to Dina-Sara Custo ’22, who built a social-distancing simulator game where the player must avoid others to advance. “The more people that see the good message the game is promoting, the better the outcome will be,” said Custo.

Oliver Eielson ’21 won Best UX/UI for his app, Busy Beach. Eielsom described Busy Beach as an app that “helps people and governments limit contact and overcrowding at beaches and stop the spread of coronavirus.” He also won the Student Vote award, determined by popular vote at the end of the hackathon.

Best Novice Hack went to a Milton team made up of Ella O’Hanlon ’21, Tori Choo ’21, Zoe Malouf ’21, Lauren Walker ’21, and Maya Metri ’21 for their app Cap Count. The app allows business owners to implement a queue to prevent too many people being in a store at once. The team described their app’s functionality as it “allows store owners to monitor and post their capacities while allowing shoppers to view live updates for store capacities and wait times.”

Zack Ankner ’20, Alex Rodriguez ’20, Andrew Rodriguez ’23 and Zan Huang ’20 won the Most Technical and Best Overall Hack awards for their app, Limitless. The team used machine learning to compress images, decreasing storage size by 1,600 percent. “Throughout the coronavirus, we have seen the effect that boredom has on people and the subsequent media they generate,” said Huang. “Our goal was to pivot from traditional compression, and use AI-based compression to encode photo media.”

Two students from Philadelphia took Most Educational with their app, TutorMe. Most Scalable was awarded to a team from Buckingham Browne & Nichols for their business analytics app called Isometra.

All submissions, along with descriptions and demos, can be viewed at https://miltonhacks.devpost.com/submissions. The Programming Club, under the guidance of Computer Science Department Chair Chris Hales, intends to hold another virtual hackathon sometime over the summer.