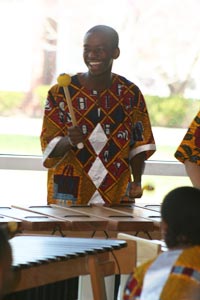 The award-winning Maru-a-Pula School (MaP) Marimba Band from Gaborone, Botswana is touring the northeastern United States this month, and as part if its tour, MaP will be visiting Milton Academy.  Managed by alumnus Reif Larsen ’98, the group will be on campus from Thursday, April 24, through Sunday, April 27.

On April 24, MaP’s marimbists will be performing at the acclaimed Ryles Jazz Club in Cambridge (www.ryles.com), and two of Milton’s Senior Jazz Combos will be opening the concert in what will be their final public performance as Milton students.  The Jazz Combos will take the stage at 7:00 p.m., and MaP will begin at 9:00 p.m.  In addition to this joint performance on Thursday evening, Milton students will engage with the young group members—ranging in age from 14 to 19 years—as their hosts for the weekend.  MaP students will join an Oral Interpretation class, perform in the Schwarz Student Center, and are invited to attend this weekend’s Spring Choral concert and Beatnik Café.

The group’s tour of Boston also includes a performance at Symphony Hall and a visit to downtown’s Prudential Center.  They were in New York City earlier this week and performed live on NBC’s The Today Show.  The focus of MaP’s Marimba tour is to raise scholarship funds for AIDS orphans.  Their country has one of the highest AIDS rates in the world and is home to more than 30,000 AIDS orphans.  According to the MaP Web site, “In 2005, Maru-a-Pula started funding two orphans’ scholarships, recognizing that many… future leaders were in this population of orphans, if only they had the opportunity for a world-class education.  The school is now funding 20 full scholarships and is hoping to raise the money to fund 60 full scholarships by 2010.”  Joining the group on their tour is Milton alumna Natalie McCormack ’00, MaP’s development director.  For more information about MaP, please visit www.afmap.org.