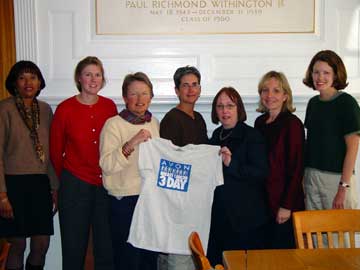 They will come prepared. Their sneakers laced tightly, their legs stretched, their bodies well-hydrated and well-rested and their minds set, determined to cross the finish line; some as survivors, all as daughters, mothers or friends.

The 60-mile walk, which starts in Fitchburg on May 17 and ends in Boston on May 19, will cover 20-mile segments each day and involve two-nights of camping. The 13 Milton Academy participants each have a special mission in walking to raise pledged contributions to aid breast cancer research and fund regular testing for the disease among disadvantaged women.

Many are walking in memory of family and friends who were victims or survivors of breast cancer and because they are aware of the statistics. “I’m walking for the people in the community like former faculty member Nina Seidenman who was truly an inspiration to all of us who watched her battle the disease with strength, humor and incredible poise,” says Jackie. “I have daughters, sisters and nieces and the statistics are too great to think we’ll never experience breast cancer in our family.”

A breast cancer survivor of seven years, Barbara Phinney says she is walking for awareness for her daughter and all daughters. Susan Roetzer is also a cancer survivor. Susan says she is walking for the “amazingly brave people who fight cancer everyday — the patients, the funny and warm people who work in the radiation rooms and the oncologists that keep doing it day after day.”
The Avon Breast Cancer 3-Day means a great deal to Ali Sozio, Class II and her sister Lauren Sozio ’00 who lost their mother to breast cancer only a few months ago. “Experiencing such a tragic loss at 17, I have only hope to find a cure for this horrible cancer,” says Ali. “My mother and I had a wonderful relationship and even though she is gone, she will forever be with me in my memories and on my shoulder, as my guardian angel. This walk means a lot to me, not only to support my mother, but to support all women out there that may have had to, do have to or will have to battle breast cancer.”

The group came together six weeks ago, finding each other through fundraising letters. “Most of us signed up individually,” explained Sandi. “We were soliciting each other and decided that it would be great to walk as a group.” Not only did each person have her own personal reason for walking, but as a group they represent the entire Milton Academy community and are walking for all the members of the community affected by this disease.

Overwhelmed by the generosity of friends, neighbors and strangers, the group has raised well over the required $1900 per participant; the group total is over $40,000 already. Some group members are adding the names of breast cancer victims and survivors to their t-shirts. “In response to my fund-raising solicitation I received a number of letters from people sharing their stories,” says Lesly. “I will walk with the names of 26 brave people on the back of my shirt.”
The group members agree that finding the time to train is not easy. Walking during lunch and after school, the Milton Marchers, as they are called, are also planning two long group walks; one at the Cape Cod Canal and another in Arlington along the Minuteman bike path.

It will be a long, hard walk, but the Milton Marchers agree that with the other’s support, a box of BandAids and a few bottles of Advil they will happily cross the finish line.