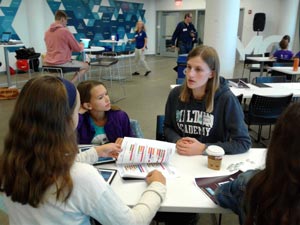 “The change in stereotypes about computer programming and coding is heartening,” says Jessica Wang (II). Last month, Jessica—along with several female classmates and friends—mentored fellow coding enthusiasts during HUBweek’s Girl Hackathon in Boston. The program, which provides middle- and elementary-school girls an introduction to coding, is a signal of forward momentum that Milton faculty member Chris Hales hopes will increase female participation in computer programming.

The Milton students served as team leaders to the younger girls, who used Hopscotch, a kid-friendly programming language, to build simple games. The teams presented their projects at the end of the day. Charlotte Moremen (III) said the younger students’ energy was infectious.

“The most fun part was talking to these little kids who had completely innovative ideas,” Charlotte says. “They hadn’t had any connection to the idea that coding is still a male-dominated field. No one has ever told them that STEM (science, technology, engineering and math) is not for them.”

Milton has seen a significant increase in the number of female students enrolled in programming classes, with 46 girls participating this year. A decade ago, there might have been one or two girls per class, says Chris. “The old stereotype of programming being male-driven and perhaps socially isolating simply is not the case anymore. Milton students involved in programming are well rounded with wide-ranging interests. I think the younger girls (at the Hackathon) saw, in our students, role models that reflect who they want to be.”

Lyndsey Mugford (III) didn’t think she would be interested in coding until she started taking classes at Milton. “Programming is a great skill set to have, but I never thought it was for me. I think girls can feel left out of the programming world. At the Hackathon, all the girls were really enthusiastic and supportive of one another, and they approached it with the mindset of working together to accomplish a goal.”

“When I was younger, all our mentors who knew how to code were male,” says Jessica. “I think it’s impressive how much of an effort is being made to engage young girls in this world.”

Katie Friis (I), co-head of Milton’s programming club, hopes Milton will host a similar event in the future. “I’ve definitely seen an increase in female participation since I’ve been here. My freshman year, I didn’t know anyone in the program, and now there are several girls in my dorm who take programming classes. I think people are realizing how interesting it is.”