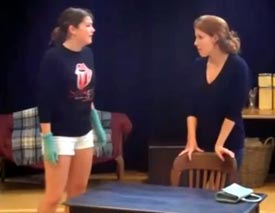 Wigg Hall becomes a cramped apartment in working-class New Orleans for the spring 1212 Play production of Tennessee Williams’s A Streetcar Named Desire. Peter Parisi, chair of the performing arts department, is directing the play with the help of two student assistants, Emilie Tréhu (I) and Rick Dionne (IV).

Nine of the ten cast members appear for the first time on the Milton stage in this production. Shannon Reilly (I) plays Stella Kowalski and Clare Dingle (II) plays her sister, the fading southern belle, Blanche DuBois.

“Blanche is a fascinating character,” says Clare. “She is complicated and tragic. She is delicate, but she can also be so cruel to the people around her.”

Adam Basri (II) plays Stella’s husband, Stanley, whose character demands a physical presence on the stage; Adam is up to the task. Referring to the original stage and film versions with Marlon Brando as Stanley, Peter says, “I told Adam that I don’t want to see Brando’s Stanley, I want to see Adam’s Stanley. He has succeeded in finding new ways to portray the character, such as really showing the relationship between Stanley and Stella.”