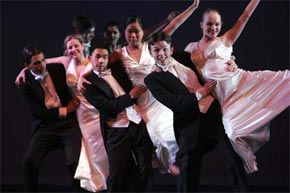 The curtain rises for Milton’s annual dance concert — a favorite event for Milton students. The house is packed, the lights go up and the audience feels the grace and energy of student dancers performing classical, modern, hip-hop and Indian dance under the direction of performing arts faculty member Kelli Edwards.

In addition to this professional-scale dance concert – much of which is choreographed by students – students celebrate dance all year through dance classes including Beginning and Making Dance (a choreography class); student-led Dance Club; and several informal performances throughout the year.

Milton celebrates its annual dance concert in Kellner Performing Arts Center’s Ruth King Theatre, which was given by novelist Stephen King in honor of his late mother and is exceptional in its adaptability to apron or thrust configurations (in the style of Shakespeare’s Globe Theatre).