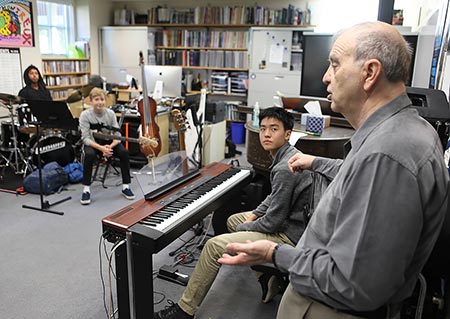 The group has been feverishly preparing for the concert event over the last few weeks in Mr. Sinicrope’s Kellner classroom. Sounds of Free Nelson Mandela, Bring Back Nelson Mandela, Mandela by Abdullah Ibrahim and Full Nelson can be heard from the Arts Commons as students rehearse a medley of these songs. The group is also planning to play other Abdullah Ibrahim songs including The Wedding, The Mountain, African Market, Soweto is Where It’s At, Mannenberg and Tsakwe/Royal Blue. Also included on the bill are Meadowlands, Yakhal Inkomo and a special version of The Lion Sleeps Tonight/Mbube.

The concert, beginning at 7:45 p.m. on October 18 in King Theatre, is free and open to the public. No advanced tickets are required. If you are on campus, please join us in celebrating South African jazz and Mandela’s centenary.