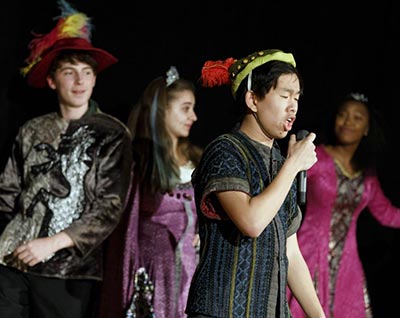 The 1212 play presents a return of Wicked Sketchy, an original production made up of 14 sketches, written and performed by students. For this production, Wicked Sketchy veteran Lyndsey Mugford (I) took on lead writing and directorial roles in this collaborative project. Stage manager Evan Jenness (I) will be running the light and sound cues.

The 20-student cast pitched ideas to each other and wrote draft skits in small groups, eventually choosing the final ones, which each student had a hand in editing. “These students come from all four grades, and the process’s collaborative nature really means that everybody gets to have a hand in the final product,” says Lyndsey. Performing arts faculty member Peter Parisi is directing.

The Spring Play stages The Curious Incident of the Dog in the Night-Time, based on the novel by Mark Haddon and adapted by Simon Stephens. In the story, 15-year-old Christopher, played by Ben Simpson (III), is a mathematics whiz with some awkward behavior problems. He discovers a neighbor’s dog murdered and sets off to figure out the mystery. Other lead roles are played by Jace Fuller (III), Anna Holtschlag (II), and Katerina Varsamis (II).