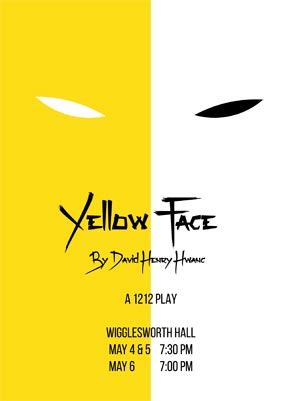 A cast of eight actors, many of whom play multiple characters, takes the stage in Wigg Hall for this spring’s 1212 Play, Yellow Face by David Henry Hwang.

The semi-autobiographical play tackles issues of race and assimilation and was written as a reaction to the real life casting of a white actor to play an Asian role in the hit musical Miss Saigon in 1990. In Yellow Face, Mr. Hwang’s character, played by Jonathan WuWong (II), accidentally casts a white actor, played by Ty Mohn (III) for an Asian role. He then proceeds to try to cover up his error in comedic fashion, although the humor explores complicated issues that are relevant today.

Performing arts department chair Peter Parisi, who is directing this spring’s 1212, says the play unfolds like a documentary with appearances by key cultural and political figures of the ‘90s. The play is also a part of the School’s Asian Pacific American Heritage Month celebration. There will be two “talk backs” with actors after Thursday’s and Friday’s show. Other events scheduled during the month include a Straus Dessert titled “Acting Asian American” on May 16 and an Asian Society workshop on tea culture led by Leo Jin (II) on May 22.