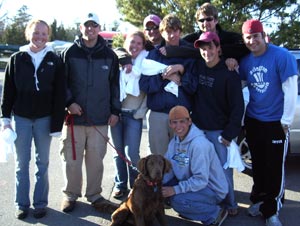 On April 23, Milton Academy’s sailing team competed at BC High for the New England Fleet Racing Qualifiers. Jon Enright (Class II) skippered in A Division with HyunJin Kim (Class II) crewing in the light air, and Sprague Brodie (Class I) when the wind picked up. Ben Whitman (Class III) skippered B Division with Martha Pitt (Class I) crewing. Ben and Martha won the B Division and Jon Enright and crews tied for first in A, the team winning qualifiers and continuing on to Tabor to sail in the New England Fleet Racing Championship. Enright and Brodie sailed the day in A Division, finishing 3rd in their fleet, and Whitman and Pitt competed all day in B, also finishing 3rd in their fleet.

After a long day of great sailing, the team finished third overall, qualifying for the High School Fleet Racing Nationals in Port Angeles, Washington, in May.