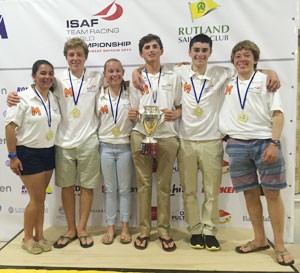 This summer, five members of Milton’s sailing team competed in the International Sailing Federation’s 2015 team racing world championships in Rutland, England. They won the gold medal in their division and took the final gold honors in youth racing—a huge achievement in an event considered to be the pinnacle of international, dinghy team racing.

The idea of competing in this big event percolated last spring when brothers Eli and Henry Burnes (II) started talking about it with teammates Ginny Alex (II), Peter Barron (II), and Charlie Hibben (III). The race requires Firefly dinghies, so the group practiced for several days at M.I.T.’s sailing center. M.I.T. is the only school in the U.S. that uses these two-sail boats in competition.

At the competition, the team broke into pairs for the three boats vs. three boats team races—Ginny and Charlie; Peter and Eli; and Henry and Paige, a California student who filled in for a Milton team member who was unable to make it.

After two round robins, the field was split into two divisions—gold and silver. All the youth groups and some adult teams ended up in the silver division. Over the course of a week, they competed in 50 races that last about 11 minutes each. “It was a lot more racing than any of us had done in the past,” says Ginny. Charlie concurred, calling the whole experience a “sailing education.” After winning the silver division, the team earned a bye and watched the two remaining teams race for the competing spot. Milton took to the water against that winning team and swept them in three races, winning the overall youth racing award.

Peter says he was very surprised that they won against some of the adult teams during the silver division races, particularly the teams from Australia. All the team members said the best part was after the last race when they headed back to shore.

“All the other racers came down to the beach, shook our hands and gave us hugs,” says Ginny. Peter adds, “They helped us pull our boats in. We’ve never experienced that before at races, and it was really memorable.”