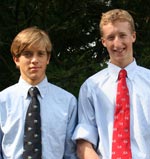 Will Hutchings (Class III) of Wolcott House and Massimo Soriano (Class II) of Norris House are serious sailors: both placed near the top of their respective classes this past summer in major national and international regattas. They are already looking forward to Milton’s sailing team competitions next spring.

Will (from Paget, Bermuda) placed 1st representing his country in the Byte North Americans held in Kingston, Ontario. He also placed 3rd representing Bermuda in the Byte World Championships. Byte fleets are made up of single-person boats. While boats may be affiliated with the same team, no teamwork is allowed.

“I got into sailing when I was nine by participating in summer sailing programs,” Will explains. He sailed Optimists through age 14, and from there he moved to sailing bytes. “I began doing it year-round and sailed in qualifiers for international regattas. After two years, I made the Bermuda National Team. My favorite thing about sailing is that it gives you the opportunity to travel to new, exotic places where you can meet people of different nationalities. I like the competition that the sport presents for each sailor and his team.”

Milton’s sailing team competes in “420” team racing, which consists of three two-person boats from one team competing against three two-person boats from another. As Will explains, “It’s typical for high schools to sail 420s because they want the team experience. The 420 has two sails, so it’s more geared for team racing. Communication is important, which increases the team aspect.”

While Will sailed bytes this summer, Massimo competed in 420 regattas similar to those in which the Milton team competes. Sailing in the North Americans regatta for Club 420, primarily an Atlantic coast team, Massimo placed 4th this year out of 117. He also finished 16th in the Buzzard’s Bay Regatta of 118 similar boats. “I placed at some smaller local regattas earlier in the season,” Massimo explains, “but none of my finishes…stood out as much as the North Americans because I was working out the kinks with a new crew. That was the satisfying part of the summer—showing a [consistent] improvement curve.”

“I’ve sailed since I can remember,” Massimo says. “I used to take my afternoon naps on a boat when I was an infant.” At six years old, Massimo sailed out of his local yacht club program, Kollegewidgwok Yacht Club. By age 13 he was sailing year-round. “I finished 31st at [the National Team Trials] in April of 2004 which [earned] me a spot on the national team and allowed me to compete internationally at the North Americans. What makes it so great at this point is that I know a lot of the people I’m sailing against. There are people from all over—New Jersey, Florida, all over New England—and it’s a big network of friends. Being at one of these regattas between races is kind of like milling around the Student Center—you see all sorts of people you know.”