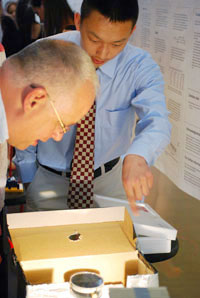 Advanced science students were also advanced communicators on Friday evening at Milton’s Third Annual Science Symposium in the Pritzker Science Center. For students enrolled in advanced biology, chemistry, physics and environmental science, discussing independent projects that they’ve pursued over the last several weeks is their culminating work. Milton science faculty invited Caleb Warren (I) and Lydia Emerson (I) to be the Symposium’s keynote speakers. Caleb and Lydia framed the event by sharing their experiences of doing science at Milton.

Students work as individual investigators, in pairs or in several cases a team of three—more than 35 students are involved. The Milton scientists developed posters that describe their work, and talked with faculty, friends and parents about their process and outcomes.

Within the four discipline areas, student projects were wide ranging. Examples include: