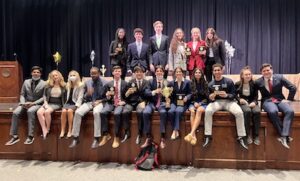 The speech and debate teams celebrated recent accolades at the Massachusetts Speech and Debate League’s (MSDL) State Championship, including a senior being named a speech state champion and a recognition for the overall speech team.

Talia Sherman ’22 captured the state championship in Dramatic Performance while the team received a third-place sweepstakes award, which measures the team’s overall success in comparison with other schools. Jack Burton ’22 was recognized for his creation and leadership of the MSDL Student Board, and was invited to give a speech, in which he acknowledged the league’s coaches for their work throughout the past two years of online competition.

In debate, four students competed in the category of Novice Public Forum and were highly successful, advancing into the elimination rounds as quarter- and semi-finalists.

Milton’s full results from the MSDL State Championship are as follows: