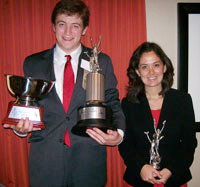 Christine Cahill ’12 placed thirteenth out of 248 students in the United States Extemporaneous Speaking competition. She was the only female in the top 14 spots.

“The experience of placing so well felt surreal and surprising,” says Christine. “I’ve always enjoyed speech and the camaraderie of the speech team, but this year I was new to the extemporaneous event, and it just clicked. This tournament was a great way to culminate my seven years on the team.”

Christine gave six preliminary speeches over the course of two days, and then presented two more speeches during every subsequent round.

“It was grueling!” says Christine. “I thought I was finished after each round, so it was emotionally draining to then discover I had to make two more speeches. Most exhausting was the fact that each speech begins with 30 minutes of prep on a question pertinent to the round topic, all to prepare for the seven-minute speech. Some examples of the questions I had were, ‘What would be the effects of a one trillion dollar stimulus?’ and ‘With such high projections earlier this spring, why have oil prices cooled down?’”

Martin Page ’12 placed fifth out of 250 students in the Senate of Congressional Debate event. He debated over 20 different topics in four days, logging 32 hours of debate to get to the final round. Martin also won the coveted Leadership Bowl, voted on by the other student competitors to recognize the most outstanding Senator.

“Winning the Leadership Bowl was very significant to me. My event can be political in a way that makes it difficult to gain the respect of fellow competitors. I felt honored to be chosen by students who know so much about debate and are excellent judges of the event.”

This fall Christine will attend Harvard University and Martin will attend Princeton University. Both may pursue debate recreationally.