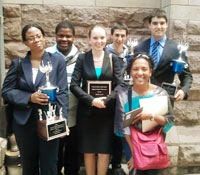 The Speech Team kicked off the school year with a stellar showing at the Yale University Invitational. Evan Garnick (I), Eva Grant (II), Liane Thornhill (I) and Harry Wood (I) traveled with team coaches Patrice Jean-Baptiste and LaJaun Foust (both of the performing arts department) to the weekend-long event, logging many rounds of competition in one of the longest tournaments of the year.

Liane took first place in Oral Interpretation (Prose and Poetry reading). Her prose piece was drawn from the book Hold Still by Nina LaCour and addressed the reverberating effects of suicide. Her poetry performance combined the work of three poets and focused on child labor in the mines of the eastern Congo, the source of the mineral coltan used in the production of cell phones and other electronic products.

“The poetry piece was meant to get people thinking about how the cell phones we use every day have a complicated history,” says Liane. “I always choose poetry based on a topic I’m passionate about and that I think is necessary for people to learn about and consider.”

Harry placed first in Original Oratory and second in Humorous Interpretation. His humorous piece was based on the book Sad Monsters by Frank Lesser. For his Original Oratory performance, Harry spoke about the power of names and how, in today’s society, people have lost track of the importance a name carries; he cited how people often focus on a name’s statistical significance rather than its cultural significance. “I wanted to explore the origin of my own name, as well, and find out what it means,” says Harry, who has been competing in speech events since sixth grade. This was the first time he competed in an Original Oratory event.

“Being a senior, I’m even more comfortable taking risks now,” says Harry. “Last year, I began competing at a higher level, and I learned a lot watching the other students perform.”

In the Dramatic Interpretation event, Eva placed eighth—an impressive feat at a tournament with over 30 schools in attendance and 120 students competing in each category.