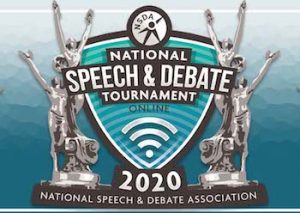 Ordinarily, the National Speech and Debate Association’s (NSDA) year-end tournament is a blockbuster, in-person event: Thousands of students and their coaches take over a host city for a week of end-to-end competition that determines the best student speakers and debaters in the country.

Because the students pre-recorded their submissions, the adrenaline of rushing around an unfamiliar school or conference center was absent from this year’s nationals, said Paiz.

“I found online nationals to be much calmer than the in-person tournaments. Competitors were able to watch the rounds, which were judged synchronously—a benefit of the online tournament was that you could submit your recording and just sit back and see how you did,” she said. “But I missed my team. I miss warm-ups with them, check-ins throughout the day, cheering at the awards ceremony until our voices got hoarse, and going for late-night fro-yo after the tournament.”

Paiz was a semi-finalist in poetry reading. She performed a program called “Modern Witchcraft,” a series of pieces connecting the historical persecution of witches and challenges for survivors of abuse. She spent hours on Zoom with Performing Arts faculty member Scott Caron preparing her piece, restructuring it and fine-tuning it to give it the right emotional heft.

Burton, a semi-finalist in humorous interpretation, received an automatic qualification for the 2021 national tournament with his performance from “Father of the Bride.” Leading up to this year’s NSDA tournament, Burton competed in three other virtual competitions, which helped him adjust to performing on video without audience feedback.

“The online tournament was an opportunity to get creative with the camera,” he said. “I chose this piece because it has a wonderful balance between heartwarming moments and laugh-out-loud humor. It’s universal—all parents have to deal with letting their children go in some capacity. Making connections is the most rewarding part of speech.”

In addition to Paiz and Burton, Colledge, who competed with the New England Worlds School Debate Team, was a double-octa-finalist in debate.