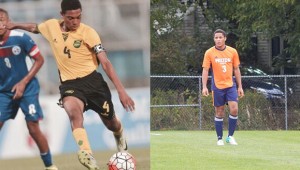 Two members of Milton’s boys’ varsity soccer team represented their respective home countries in the Caribbean Finals of the CONCACAF U17 World Cup Qualifying held in September in Trinidad. Brandon Jones ’18 played center back on the U17 Bermuda national team, and Jeremy Verley ’19 played midfield for the U17 Jamaica national team. Coincidentally, the two teams faced off in the first round of the tournament and Jamaica won the game.

“The tournament was the closest I’ve felt to playing on a professional soccer team,” says Brandon. “The whole process of training and playing games in front of a huge crowd was really exhilarating.”

Jeremy’s team, which he captained, made it to the semifinals after a draw with Haiti and a win against Trinidad. They lost to Cuba in the semifinals, but they beat Curaçao in the third place game, earning them a spot in the final rounds next spring.

“I love that soccer is a team sport; it takes more than one individual to win,” says Jeremy. “Soccer brings together all kinds of people from different backgrounds. On my team, we were from different parts of Jamaica, and we ended up having such great chemistry on the field.”

CONCACAF is the soccer federation for North America, Central America and the Caribbean that governs all international competitions. The CONCACAF final rounds that Jeremy is competing in are the final qualifying stage for the World Cup at the U17 level. U17 is the youngest age group with a World Cup competition, making it the highest-level youth competition in which players can compete. Chris Kane, Milton boys’ varsity soccer coach, says it’s “pretty incredible that we had two players in the tournament, and it’s amazing that Jeremy may have a chance to captain a team to the full World Cup next summer.”