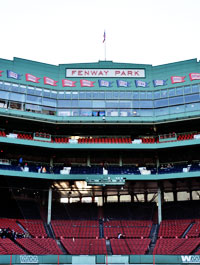 For many New Englanders, a chance to step onto the baseball diamond at Fenway Park is a dream come true. For two Class IV students, that dream became reality when both had the chance to sing the national anthem before games.

Coalter Palmer (IV) sang the anthem at a Toronto Blue Jays game in September. He was part of a group of musical family and friends invited by his uncle—vice president of Red Sox Nation, the team’s fan club. Because the opponent was a Canadian team, the group also sang “O Canada.”

“I had to work hard on memorizing that song a few days before the game, although singing it with a group made it much easier,” says Coalter.

Dalton Letorney (IV) sang “The Star-Spangled Banner” two years ago before a game against the Tampa Bay Rays. To earn that spot, Dalton auditioned in a “Sing Your Way to Fenway” contest held all over New England. Dalton did not win the competition, but the organizers were so impressed that they called him back to sing on another day.

The boys agree that one of the perks of this opportunity is arriving early to the historic park and rehearsing in an empty Fenway.

“When I first got to the park, I went right out and sat in the empty seats just to take it all in,” says Coalter. “Eventually the players start to arrive, and you get to watch them practice. My favorite part was getting to high-five Koji Uehara.”

“Having that rehearsal time really helped,” says Dalton, who takes voice lessons at South Shore Conservatory. “Voices in the park echo, and you have to learn to sing over the echoes. I practiced at home on a microphone with the echo turned way up so I could get used to the feeling.”

Listen to their Fenway performances: