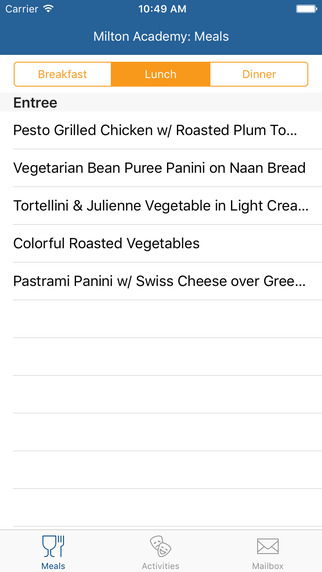 In one place, students can learn what’s for lunch and dinner, plan their weekend fun, and securely access their mailbox combinations, all from a smartphone. The “Milton Academy Students” app—available for free download on both the Android and iOS platforms—is the brainchild of Ravi Rahman (I), Justin Schwaitzberg (I), Harry Kwon ’15 and Neekon Vafa ’15. The boys developed the concept and got to work in last year’s Programming Applications course, taught by Chris Hales. This fall, Jacob Aronoff (I) helped rewrite some of the code, refining the program before the group submitted the app to Google and Apple for approval.

“The beginning was the hardest, when you are following tutorials and not quite understanding why you do things a certain way,” says Ravi. “Then you have the ‘Aha!’ moment when it all makes sense. For me, Android Java was easier to learn than iOS Swift.”

Though the group completed much of the groundwork in last year’s section of their programming course, the boys found—when they picked up their work again this fall—that most of the programming needed to be rewritten. Justin’s main responsibility was using and adapting the Flik dining services menu code. This task meant communicating and working closely with the head of Flik on Milton’s campus, because in order to speak to the app, the data needs to be entered a certain way.

“Mr. Hales encouraged us to explore on our own, rather than telling us what to do,” says Justin. “That gave us a lot more flexibility, and we had to figure out how to do things as a team, which was great. I feel like the main purpose of class was actually to learn team building.”