By Kate Higgins (I) and Hannah Nigro (II) 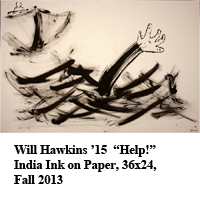 Will Hawkins (I) and Brian Kim (II) are both Gold Key recipients in art. In Advanced Drawing class with Mr. Torney, Will created “Help!” a drawing that depicts strokes of black ink splashed across the paper with a hand reaching out, emerging from one particular stroke. If you look closely, you can just make out a small boat in the distance. Will explains that the boat “gives a sense of uncertain hope, where the boat seems close, yet the person is almost completely submerged.” This piece is the result of experimentation with India ink and unorthodox tools such as a mop, cups, sponges and cloth. Mr. Torney described Will’s piece as “a wonderful example of simplicity and wit, seemingly spontaneous but actually quite deliberate, considered and sophisticated.” Will noted that this particular piece was one of many he created in which he was “exploring the emotions behind life’s struggles and trying to bring out the visceral nature of fear and being overwhelmed.” Brian’s piece, “Peek-A-Boo” is “a technical triumph” according to Mr. Torney. Brian used the photorealistic grid transfer process to combine a photo of his current head and the body of himself as a baby to create a surreal self-portrait.

Milton students fared extremely well in the writing category with Sophie Cloherty (II), Julia Grace (I), Hannah Iafrati (I), Jiyoung Jeong (II), Chloe Kim (III), Eliza Scharfstein (II), Tiara Sharma (II) and Alexandra Upton (IV)  all receiving Gold Key awards for their pieces. Many of these pieces stemmed from the writers’ personal experiences, which, as Chloe says, “proves that writers must write about what they know.” Her Gold Key-winning poem, “Roseville, Minnesota, 2003” stemmed from creative writing teacher Mr. Connolly’s encouragement to write a poem based on a photograph. Chloe took this opportunity write about a photograph of her cousin and herself. The two of them had fallen apart and she used her poem to explore the reason behind this. Her second Gold Key poem, “First Lesson,” balances both truth and lies. She uses her true experience of learning to draw stars from her mother to explore the lessons she learned. The poem ends with Chloe’s sad realization that her mother taught her everything except how to remember her after her death. In reality, however, her mother is very much alive.

Tiara Sharma drew from her Indian culture to create her two Gold Key-winning poems. “Vermillion” stemmed from her personal experience with her aging grandfather. She wrote about the common theme of death but added the unpredictable twist of writing it as a prediction of her grandfather’s demise. Writing from her grandmother’s perspective, she “tried to capture the stigma of being a widow in Indian culture.” By drawing upon her grandparents’ happy memories of living in Sringar, she hoped to help her grandmother and herself come to terms with their inevitable loss. Her second poem, “Missing Girls,” addressed the problem of sex-selective abortions in India. She played on the irony of how many female goddesses are revered in Indian culture, yet females are often encouraged to have an abortion if their fetus is not male. While the basis of the poem was mainly to address societal barriers in India, Tiara found that “she came to terms with her own femininity and realized it could be a powerful thing.”

Eliza Scharfstein took pieces of her experience living with a host family in a Chilean home, accomplishing her goal of juxtaposing the understandable awkwardness of being in an unfamiliar place with the immediate comfort that she feels. Her intentionally simple images and language allow for a strong narrative voice. This honest piece highlighted the loving relationship that Eliza shared with her host family.

Another Gold Key-winning poem, Jiyoung Jeong’s piece “Haunted,” dramatically compares the image of a hunted shark at a market with a soldier on the battlefield. The choice of this comparison evolved from a desire to “depict our civilization’s greed that consumes not only other species, but ourselves.” Jiyoung wowed the judges, also receiving a Gold Key for a drawing, two Silver Keys for a painting and mixed media piece, and two Silver Keys and an Honorable Mention for poetry.

Sophie Cloherty received a Gold Key for a flash fiction piece, titled “After Light Falls.” The piece is “hyper focused on the interaction between a father and son and for the most part is driven by dialogue.” Inspired by her love for Ernest Hemingway’s Hills Like White Elephants, she focused her entire story just on one conversation.

Hannah Iafrati and Alexandra Upton both wrote short stories. Hannah’s piece, “Birdman,” tricks the audience into the believing that the narrator and main character are roommates, when in reality, the narrator is a voice in the protagonist’s head. What started up as an attempt to create an interesting, yet, average, character, extended into the making of her “most unhinged character yet,” finding that the audience sympathizes more with the inner demon than the protagonist. Alexandra’s piece, “One Week,” portrays a man who has just found out he has one week to live. As a result of hearing the news, he spends the week traveling the world in order to revisit all the places that his wife went. He returns home, dying peacefully. This piece stemmed from Alexandra’s own wishes to travel.

Will Hawkins – Drawing and Illustration “Help”

Silver Key and/or Gold Key award winners are invited to attend the Regional Awards Ceremony at the Museum of Fine Arts on Saturday, March 7. Gold Key art awards winners will have their artwork displayed at Gallery 808 at Boston University, March 7 through 15, and both are eligible for National Scholastic Art Award honors.