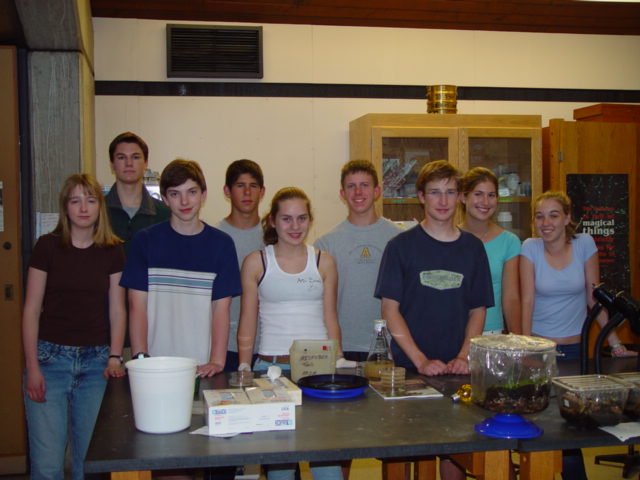 A team of seven sophomores has been working since February on the second Milton Academy microgravity experiment to travel on board shuttle Columbia. Their experiment will be aboard Columbia STS-107, scheduled to lift off July 19, 2002 from the Kennedy Space Center in Florida.

The first step in the process was a brainstorming session to identify an experiment. This was perhaps the most challenging step, since the experiment must comply with strict NASA limitations for space and materials for the DMDA apparatus, (dual materials dispersion apparatus), that a team uses in their experiment. Microbiology experiments are easily adapted to the DMDA. The Milton STS-107 experiment involves testing the effects of microgravity on antibiotic resistance on bacteria. Milton students began working on this experiment in February.

The second step in this research involves testing antibiotic resistance of the bacteria on terra firma at Milton Academy. At present the team is testing the bacteria, (E. coli strain MM294), against an antibiotic screen, (kanamycin), to determine the level and or rate of resistance in the E. coli. The MM 294 E. coli is a laboratory safe strain of the bacteria that poses no threat to humans. Moreover, the students working on the experiment are required to use strict aseptic technique that demands sterile treatment of work surfaces and equipment with proper disposal protocols for contaminated materials.

Ground based testing at Milton will be completed before the team travels to Kennedy Space Center this July to assist in the loading of our experiment on the DMDA. STS-107 is scheduled to be in space for 16 days. During that time the team will grow the MM294 in nutrient broth. At the end of the recovery, technicians will send the team’s bacteria back to Milton. This microgravity MM294 will then be used for step three, which is testing the microgravity MM294 against antibiotic screens to determine their rate and/or level of antibiotic resistance. Milton’s ground based testing and subsequent testing with the microgravity MM294 will be done using identical protocols.
This experiment does have potential implications for continuing human work in space. If the Milton team discovers that MM294 bacteria exposed to microgravity express a higher rate and/or level of antibiotic resistance then this would warrant further research to confirm these results. Confirmation that exposure to microgravity increases antibiotic resistance in bacteria may for example lead to stricter hygiene procedures for cleaning spacecraft or the inclusion of antibiotics in routine health protocols for astronauts on extended space flight.

In 1998 Milton Academy sent up their first microgravity experiment on the heralded STS-95 mission that carried astronaut John Glenn back into space. This experiment was a crystal growth experiment that involved testing the effects of microgravity on growing potassium chromium aluminum sulfate crystals by osmotic dewatering. The results of this first experiment were highly successful thanks to the efforts of Milton alums, Adrina DeVitre ’01, Jessica Tooker 01, Chris Rodriguez ’01 and Nathan Bliss ’01.