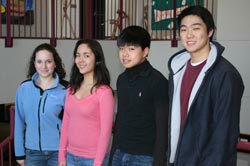 “The MMEA festivals feature some of the best performers in the state,” said music department chair, Don Dregalla. “The Eastern district, which is new this year, features schools in and around Boston and is probably the strongest musically.  For a school the size of Milton, getting five students into the festival is an achievement.”