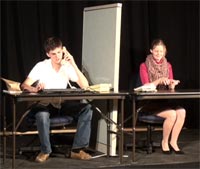 In a series of one-acts, seven student actors take their audience down Route I-95 South to the southeastern suburbs of Boston, specifically the old industrial town of Taunton. Rick Dionne (III) and Oona Newman (I) are the student directors of this winter’s 1212 play, East of Easton, by local playwright William Donnelly.

“The stories are about everyday life and the way different people deal with realistic situations,” says Rick. “Some of the stories are very funny with lots of comedic elements, and other stories are more serious and low key. There are some overlapping characters and common settings that tie the pieces together.”

Watch a scene from the play.

As a sophomore, Rick already has significant 1212 experience. He appeared in last year’s production of Love and Intrigue and helped to direct last spring’s A Streetcar Named Desire. Performing arts faculty member and 1212 director Peter Parisi says it’s been easy to leave rehearsals in Rick’s hand when he is pulled away for other Milton commitments. Earlier this winter, the 1212 cast and crew had a chance to sit down with the playwright William Donnelly.

“Meeting him was really cool,” says Rick. “He was really interested in the choices we made, and we were able to ask him questions about specific parts. He could clarify for us what he meant by certain things.”

The tradition of Milton’s 1212 Plays began over 30 years ago in room 1212 of Warren Hall. The performances evolved from play readings to fully staged productions under the direction of the late faculty member Nina Seidenman. When Warren Hall was renovated, and room 1212 became an English classroom, the productions relocated to Wigg Hall. The space may have changed, but the philosophy is the same: intimate productions with small casts, minimal technical demands, and challenging material for both actors and audience.