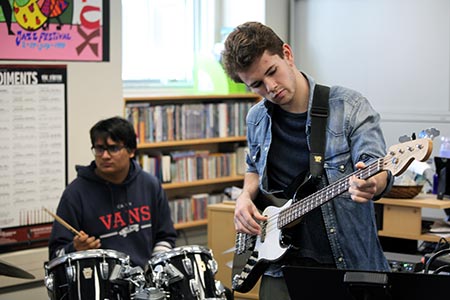 The Jazz Band will make its 12th tour of South Africa this spring break, continuing a Milton tradition that began in 1992, band director and music faculty member Bob Sinicrope says.

Jen Zhao (I) is excited to travel with her Jazz Band friends and play a mix of American and South African jazz. Playing music together is a great, immersive way to learn about a culture, says Jen, who is from China. She noticed, when she came to the United States, that the notions of American culture she’d developed in China were incomplete, and anticipates the same thing about traveling to another country she has learned about from afar.

“For me, American jazz was a type of music from a cultural background I was unfamiliar with,” she says. “Some of the best friends I have now are from my jazz class and jamming to music together, so I can see the same thing happening in South Africa… I think what we can learn about another place’s music and culture in a classroom is limited, so I look forward to seeing authentic South Africa.”

The tour has three purposes: to play music at several venues, to provide a cultural and social-awareness experience for the students, and to have fun.

“The kids always ask why we play South African music for a South African audience,” says Bob. “It’s a way to connect with people there, and show respect. Several of our performances are with local groups—they play, we play, and then we play together. The common language is the music. It’s full of joy, and it has lots of meaning.”

The trip begins with a visit to a wildlife preserve and continues through various townships and schools with which Bob has developed partnerships over the years. Students will also tour the prison at Robben Island, where President Nelson Mandela was held for the first 18 years of his 27-year political imprisonment.

For another spring break trip, seven students, a “small but mighty group,” will travel to New Orleans, Louisiana, with Community Engagement Programs and Partnerships (CEPP) for the second year in a row, says CEPP director Andrea Geyling-Moore.

During the trip, Milton students will visit parts of New Orleans still reeling from the devastation caused by Hurricane Katrina in 2005, and they will participate in restoration efforts. The plan is to revisit some of the places and activities that made last year’s trip a success, says Andrea.

“We hope to do similar things. We visited a couple of food pantries, we went to a horse rescue ranch and helped out there,” she says. “We worked side-by-side with differently abled adults at a Mardi Gras bead recycling center, visited a local school, and met with an environmentalist who works in the 9th Ward.”

The New Orleans trip also involves some cultural tourism. Last year, students met artists and entrepreneurs who lived through Katrina and decided to stay, rebuild the city and contribute to its unique cultural landscape. “Those stories about destruction and resilience are pretty powerful,” Andrea says. They will again visit Studio Be, a 36,000 square-foot gallery by visual artist Brandon “BMike” Odums, which features room-sized wall murals and other artwork capturing social justice stories and images of black icons.