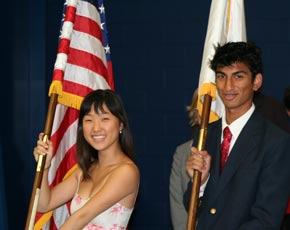 Familiar ritual launched the new school year at Milton as faculty and students processed into the Fitzgibbons Convocation Center on Monday, September 11. The Academy’s new interfaith chaplain, Suzanne De Buhr, led the invocation reflecting upon the tragedies that occurred on that date five years ago and since then, and considering the thoughts and actions we might take in response.

Samm Yu and Adit Basheer—co-head monitors—welcomed fellow students, especially those new to Milton. Samm implored the student body to reach out and help make new students feel part of a warm community, as classmate Molly Serventi-Gleeson had done for her several years before. Adit, citing Steve Irwin, who loved crocodiles but was fearful of parrots, encouraged students to seize the advantage this year by facing their fears and trepidations with boldness and humor. The co-head monitors each received the James S. Willis, Jr. Memorial Award, given in memory of James S. Willis, Jr. ’50, “a gallant leader.”

Dr. Robertson introduced the monumental sculpture of Sarah Sze ’87, The Edge of One of Many Circles, erected in the Schwarz Student Center this August. Robin explained the origin, importance and meaning of this permanent work by the internationally renowned alumnae sculptor, given as a gift to Milton by Richard Perry ’73 and his wife Lisa Perry.