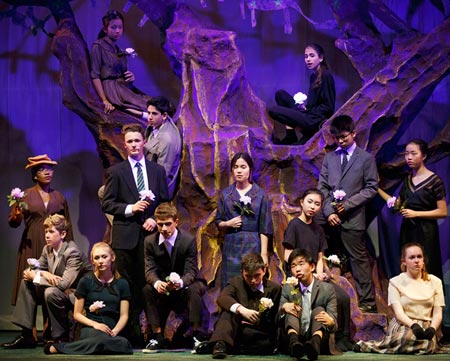 Inspired by the Ziegfeld Follies and other revue shows, the Class IV play is a collection of songs, poetry, short scenes and music, specifically tailored for the Class IV actors. The material explores the journey from birth to death and the production is titled: The Class IV Follies: The Tree of Life. There are songs from modern musicals and the classics; scenes from plays, sketch comedies and films; and poetry ranging from Shakespeare to Maya Angelou. The Class IV play is a long-standing performing arts tradition involving the entire class.

The fall play is a modern take on Romeo and Juliet, featuring 11 student actors with Clara Wolff (II) as Juliet and Devon Whalen (III) as Romeo. The setting is an abandoned warehouse in an unnamed city where a group of youths regularly hang out. They decide to put on the Shakespeare tragedy. Performing arts faculty member Shane Fuller says the production uses the stage in a unique way—an alley theatre. Students are playing multiple characters, mixing up gender and incorporating some dance and movement pieces.