Milton’s First Performance of the Year is “Extra-Ordinary” 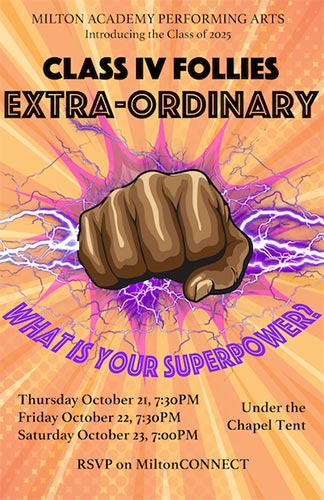 Live performance returns to Milton’s stages Thursday with the Class IV Follies, an original show called Extra-Ordinary. The show, which explores the theme of superpowers, will be held in the Chapel Tent for three nights.

Extra-Ordinary has the structure of the Class IV Follies—a series of scenes around a central theme—telling stories of some characters that the audience will recognize, like Roald Dahl’s Matilda, and some that are new, said Performing Arts Department faculty member Scott Caron, who is directing the show.

“We’re navigating through a lot of characters that we know from literature, movies, and TV shows,” Caron said. “We follow their journey over the course of one hour, as they discover and unpack their superpowers.”

Extra-Ordinary is a “devised piece, meaning that it’s theater that exists, but hasn’t existed in this way, and we are creating it for the first time,” Caron said. “So, while we have some scripted scenes, what we also did that was so exciting was talk to the cast about superpowers—what their favorite superpowers are, how they use superpowers in everyday life. We’ve used some of that verbatim material to thread through the show, with our actors playing versions of themselves.”

In addition to the cast of nine actors, two members of Class IV, a pianist and cellist, will provide the score for much of the show. They will play contemporary songs arranged for a chamber combo, Caron said.