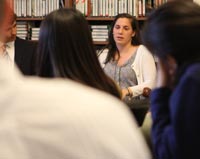 At the Bisbee Tea, Bisbee prize-winner Deanna Ferrante (II) answers questions from peers and faculty about her research paper, “It’s All Just Black and White: The Incarnation of the Ku Klux Klan.” The Bisbee Prize honors and celebrates outstanding student research in U. S. history. Each year, Milton faculty members teaching the U.S. History and U.S. History in the Modern World courses select honorees from among their students. Deanna is one of 13 prize-winners whose research ranged from the Dawes Act of 1887 through the Free Speech Movement.

Sam Brigham
The Dawes Act: Manipulated to Deprive Native Americans of Their Land

Julia Carabatsos
The Portrait of War: How Photography Impacted the Perception of the American Civil War

Jake Daniels
The United States’ Intervention in Haiti: A City Upon a Mountain

Deanna Ferrante
It’s All Just Black and White: The Incarnation of the Ku Klux Klan

Jiyoung Jeong
School Desegregation with White Deliberation: How America’s Systematic Racism Sabotaged the Promise of the Brown v. Board of Education Decision

Madeleine Landau
Power over the Pacific America’s Rise to Dominance

Matthew Langen
Nuclear Fallout: American Response to Hiroshima and Nagasaki at the Dawn of the Atomic Age

Lily McCarthy
Japanese Internment in Hawaii: Investigating the Factors that Led to a Wartime Situation Different from the West Coast

Clementine Wiley
“What the Hell is Going On?” Deceptions Coming to Light and to Print after the Tet Offensive

The Bisbee Prize was established to honor Ethan Wyatt Bisbee, faculty member in the history department who retired in 1993, after 40 years of teaching. The prize was endowed in 2005 through a gift by John Warren, formerly of the history department, and his wife, Laura Warren ’78, former head of Robbins House.