Milton’s Jazz Combos Look Back to 1959

“I’ve found you’ve got to look back at the old things and see them in a new light.”
– John Coltrane 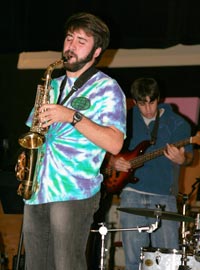 On October 2, students from Milton’s advanced jazz combos looked back to 1959 and shined their light on classics from the year described by music faculty member Bob Sinicrope as “the single most significant year of major breakthroughs in jazz styles.” The concert event, Jazz 1959: The Beginning of Beyond, celebrated jazz innovations from 1959 and featured Milton’s top jazz talent performing selections from legendary artists Miles Davis, John Coltrane, Dave Brubeck and Ornette Coleman (to name a few).