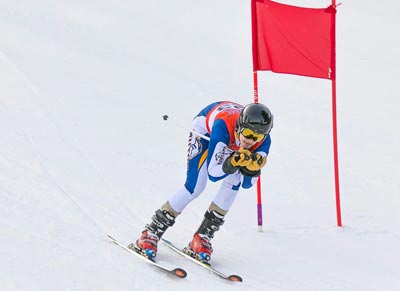 In a performance for the ages, both the boys’ and girls’ varsity ski teams emerged victorious in the Class B NEPSAC Alpine Skiing Championship held in mid-February on Okemo Mountain in Vermont. The last time a Milton team won NEPSACs was 2002, when both teams swept the championships.

The teams competed in the Slalom and Giant Slalom (GS) events. Team scores for each event are the sum of the three best skiers’ places from each team, and final team scores are the sum of team scores for Slalom and GS. The team with the lowest overall score wins. The girls’ varsity team finished with an impressive 18 points in both Slalom and GS and a total of 36 points overall, outpacing the Taft School, who placed second with 51 points. Last year, the Milton girls’ team also scored a total of 36 points, but still finished in second behind Taft, making this year’s first place triumph especially sweet.

The last time the Milton boys’ team finished in the Top 5 was in 2009, earning 4th place. This year, led by Matt Ryan (IV) and Beck Kendig (IV), the boys finished with 28 points in Slalom and 30 points in GS this year. Their team total of 58 points is a huge improvement from last year’s total score of 189 points. Chris Matthews (I), captain of the boys’ team, said, “I think a change in mindset definitely lent itself to our performance at NEPSACs.”

Girls’ team captain Emily Bell (I) praised the depth on both the boys’ and girls’ teams that was crucial to the victory. “The talent runs really far down our roster,” she said.

Milton also benefited from young talent, as three out of the four Milton skiers who placed in the Top 10 in both Slalom and Giant Slalom were underclassmen: Katarina, Matt and Beck. “The influx of young skiing talent Milton has this year had a huge impact,” said Chris.

Both Emily and Chris said that the spirit of the boys’ and girls’ teams and their support for each other helped the teams perform. “We’re a really tight team and that was something that manifested itself this season,” said Chris.

Everyone “watches each other’s races and we all root for each other, so it’s a really nice support system. Winning both was so exciting, and we all got to celebrate together,” said Emily.

A version of this story originally appeared in the Milton Measure.