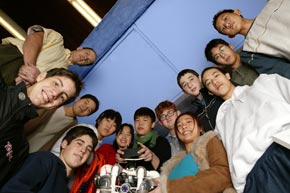 As a result of their second place finish, the MAROV Team has earned a qualifying slot, along with High Technology (New Jersey), in the Fourth Annual National ROV Competition to be held at the Neutral Buoyancy Laboratory at NASA’s Johnson Space Center in Houston June 17-19, 2005.

The Team encountered three underwater “Olympics” tasks in roughly 18 feet of water. Each task was timed and included a five-minute preparation time between tasks. ROV’s vehicle, Henrietta, had first to descend to a mock oil platform in the Gulf of Mexico’s Green Canyon and cap an oil well. She then had to surface and prepare to dive to transport a fiber optic cable and communications probe to an undersea junction box in order to reestablish a communications link. The third timed task required Henrietta to replace an instrument module on a vertical wall at depth. All tasks were completed using only the views from the two underwater cameras on ROV’s vehicle.

Forty-seven high schools, technical and community colleges, and universities from across the U.S. and Canada are scheduled to compete in the Fourth Annual National ROV Competition organized by the Marine Advanced Technology Society’s (MTS) ROV Committee in June. “Underwater Olympics” will once again be the setting for the pool mission tasks that include precise navigational skills, as well as the location, maintenance, and recovery of scientific equipment.

Last year, MAROV took first place in the New England and, despite the significant equipment failure of a camera, the team placed 10th out of 23 nationally and took top honors for overall design and use of their three remotely controlled grippers.

The team is advised by faculty member Tom Gagnon (science).