Originally conceived as a component of the course on the Francophone World, the Montreal exchange program gives our students an opportunity to live in a Quebecois family for 4 days and to immersed themselves in the French Canadian language and culture. The exchange makes our study of Quebec (culture, language, history, current political situation, etc, ) more meaningful. Each student is matched with a student of the College Mont Saint-Louis, our sister school in Montreal.

The Montreal students will visit to Milton, in return, from May 21 to 24. This year’s exchange trip ( November 21-24), the seventh between our two schools, was particularly successful. We were blessed with unusually warm weather, which made for great shopping in the “vieux Montreal.” On Saturday night the group went to a musical comedy, “Pied de Poule”. 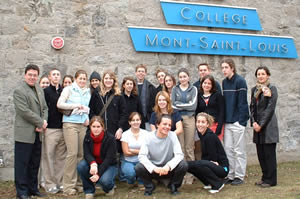 Students spent Sunday with host families, sightseeing. On the way back to Milton we visited an abbey in Saint Benoit-du-Lac, bought cheese, cider and maple syrup made by the monks and enjoyed French cuisine in the town of Magog, just before the border. Althought four days is not much time to make great progress with the language, our students adjusted to the local accent and put into practice the French they had learned at Milton. The greatest value of this program is cultural and personal. Our students discovered that a vibrant and distinct culture thrives just 5 hours north of Boston. Those who had been to France were surprised to see how different the Quebecois were from the French, and how proud of their history they were. Students now understand what the Quebecois licence plates mean (“Je me souviens” = I remember) and I think, ultimately, a better appreciation of diversity and difference.