“Murder, Mayhem, and Mystery” Brings the Wide World of Sound to King Theatre 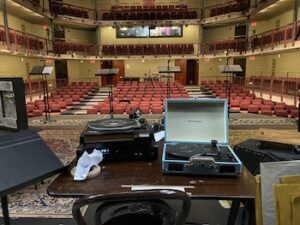 Record players provide just some of the sound effects for the winter play, Murder, Mayhem, and Mystery.

Rotary phones, crunchy gravel, and a tiger’s roar—well, an overturned hand drum containing a precise number of metal nuts—are among the many objects carefully arranged on the King Theatre stage as student Foley artists and actors prepare for Thursday’s opening of the winter play, Murder, Mayhem, and Mystery: An Evening of Radio Dramas.

The show tells four classic radio dramas and takes the performers back to the early 20th century, when radio plays were can’t-miss entertainment. As students perform the stories, they use dozens of handmade sound effects. A vuvuzela, extended and retracted, becomes an elephant; a train chugs into station with a combination of metals and whistles; big band music scratches out from a vintage 78 record.

Star Bryan ’23 plays Ms. Stevenson, the main character in “Sorry, Wrong Number,” as well as Inspector Narracott in “Personal Call,” and Julia Keene in “Butter in a Lordly Dish.” Learning the different roles within separate stories provided an interesting challenge.

“Ms. Stevenson is angry or frustrated through basically the whole story, and Julia Keene starts out flirtatious, but then takes a turn,” Bryan said. “I’m not used to playing anger or flirtation, so getting into both roles took time.”

“Seeing how different assorted objects can be used to make realistic sounds is fascinating. [This show is] truly not like any show I have ever done at Milton.”

The production is unlike any that Milton has done in a long time, Anastas said. While audio storytelling has seen a resurgence in podcast and audiobooks, the school hasn’t recently created a dramatic performance so rooted in listening and sound effects. The hand-crafted and mechanical sound effects provide warmer and richer sounds than a digital soundboard could.  Learning how to operate some of the older objects, like rotary phones, has been a fun exercise for the students, she said.

Manny Uzobuife ’22 was “shocked” upon hearing the train sounds come together for the first time, saying, “Seeing how different assorted objects can be used to make realistic sounds is fascinating.” The audience will have fun guessing which objects make which sounds, Bryan said. Uzobuife noted that the play is “truly not like any show I have ever done at Milton.”

The best part of being in the show has been connecting with castmates, said Abby Rochelle ’24. They’ve “bonded over late nights and weird sounds,” she said.

“Everyone at Milton should see our show because it’s something they have never seen before,” Rochelle said. “Nobody performs radio plays in front of an in-person audience. It will be such a fun experience to see not only the actors giving the characters life, but also to see the behind-the-scenes creation of the sound effects.”

Murder, Mayhem, and Mystery runs Thursday, February 10, and Friday, February 11, at 7:30 p.m., and Saturday, February 12, at 7 p.m., in King Theatre. Register for tickets in advance. All in-person audience members must wear masks at all times while in the theater and the Kellner Performing Arts Center. The show will also stream live on Zoom.