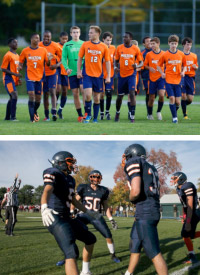 The boys’ varsity soccer and varsity football squads have been selected to compete in post-season play. Ranked number seven in New England Class A, Milton’s soccer team will travel to number two Worcester Academy for a 2 p.m. game on Wednesday, November 13, in the quarterfinals of the New England Tournament. The football team was selected to compete in the Tom Flaherty Bowl at Dexter School on Saturday, November 16, at 1 p.m., as part of the NEPSAC Bowl Series.

The soccer team finished the season strong with a pair of wins over ISL foes Brooks School and Noble & Greenough School in the final week to secure their playoff spot. Mark Leon (II) led the team in the final week, tallying two goals and three assists, earning him the title of Mustang of the Week for the second time this fall. The team finished the season with a 13-3-2 record. They placed third in the ISL with a 12-2-1 record. After a dominating effort on Milton-Nobles Day, the team prepares to face Worcester Academy in the New England Class A Tournament this coming Wednesday.

The football team suffered a heartbreaking loss to Noble & Greenough School in the final game of the season, to finish their season 7-1. The season was highlighted by a definitive 35-14 victory over Governor’s Academy, ending Governor’s 23-game winning streak. The team was led by senior Drew Jacobs, twice named Mustang of the Week for his efforts on the field. The team now prepares to face a tough Dexter team in Saturday’s bowl game.