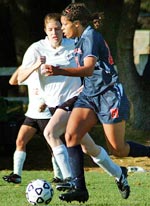 Milton’s varsity girls’ soccer squad put on another brilliant performance at home this past Saturday to take down Exeter by a score of 3-0 in the team’s sixth shut out victory this season. Head Coach Peter Kahn noted that alongside the “sharp” defense by goalkeeper Grace McDonough, the continuing success of Milton’s offensive attack helped seal the win.

“Samantha Curran ’13 made her first varsity start and made the most of the opportunity,” said Coach Kahn. “She needed only five minute to score her first career goal off of a penetrating run through midfield by Josette LaRochelle ’11. We were not able to convert any more first half chances, but it only took us five minutes into the second half to get the insurance goal when Megan Kim ’12 scored off of a cross from Beverly Leon ’10. Beverly also set up the final goal with a fine cross that Tori Cabot ’12 knocked home.”

The 6-1 Mustangs will try to add to their three-game winning streak this Saturday at home against BB&N.