Mustangs Dominate on the Ice and on the Court 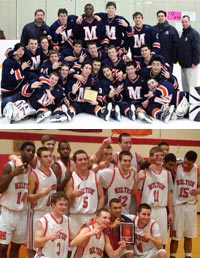 Fans of Milton’s varsity boys’ basketball and hockey raised the roof last night as both teams won their respective first-round tournament games at the Athletic and Convocation Center. It was a rare and special night with two post-season games that began at different times so fans could attend both competitions. In the end, some fans had to run back and forth to catch the action as both games finished almost simultaneously.

Boys’ hockey was an exciting nail biter that went into triple overtime as Milton beat Nobles 4-3 in the quarterfinals of the NEPSAC’s Stuart/Corkery Division tournament. Dan Merenich (I) scored the winning goal with an assist from Woody Hudson (I). Goalie Sean Dougherty (I) made 46 saves for the Mustangs.

“We knew it wasn’t going to be easy,” says Coach Paul Cannata. “We had to bring our best to the game. We knew they would bring their best. It was a lot of fun. For the boys to play the way they did in that kind of pressure-cooker environment, it showed the positive side of athletics.”

“Both teams just played beautifully,” says Head of School Todd Bland. “They played hard, fair, fast, and clearly the players were giving everything they had out there. And I commend Nobles for playing a superb game from start to finish.”

“All of the players, both Milton and Nobles, did a fantastic job. And so did the officials in calling a close game. Hats off to all of them.”

Milton went into this game with a 3-0 record against Nobles, a long-time rival. Winning a fourth game in a row was a serious achievement, and the crowd played an important supportive role.

“The crowd was fantastic,” says Mr. Bland. “From the first whistle all the way to the end, they kept up their energy and spirit. They had great cheers. It was exactly what I’ve been hoping for this year; we’ve consistently emphasized cheering for Milton rather than against our opponents.”

The hockey team advances to play Lawrence Academy in the semifinals on Friday at 5:30 p.m. in Salem, New Hampshire.

On the other side of the Athletic Center, the boys’ basketball team played their first playoff game of the Class A tournament with a strong win against Exeter, 57-33. It was the last home game for the Class of 2011, and they certainly made it count. K.J. Pontes (I) connected with 13 points and five rebounds in one of his best games at Milton, and Captain Dennis Clifford (I) provided 16 points and eight rebounds.

“We played together as a team, which is so much fun for me to watch and be part of as a coach. Our energy from the players on the court and the guys on the bench was terrific,” says Coach Lamar Reddicks.

Mr. Bland, who was one of the fans going back and forth between games, says, “The boys took control from the beginning. They were on their game; their defense was unbelievable. They made it impossible for Exeter to ever get into the flow of the game.”

The basketball team will travel for the semifinals to play Choate on Friday at 4 p.m. in Wallingford, Connecticut.

At the end of a long night, the boys’ basketball team burst into the locker room to congratulate the hockey team and vice versa.

“In light of current events and what’s happening in the world, it’s such a blessing to have something to cheer for. That kind of energy really does make things better in your community, regardless of whether you are an athlete or not,” says Mr. Bland.