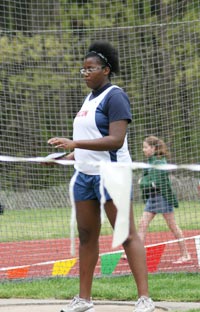 On Saturday, May 2, Independent School League (ISL) teams battled on the track and field of Governor’s Academy in Byfield, Massachusetts, during the 2009 ISL Championships.

Milton’s girls’ and boys’ track teams fared well in the daylong meet against stiff competition, placing fifth and sixth overall, respectively. Individual athletes on Milton’s squad achieved their personal bests. Ijeoma Duru, with her throw of 32 feet and nine and a quarter inches in the shot put event, claimed the top spot in the ISL and became the 2009 ISL Champion. Kate Ballinger also reached a personal best with a nine-foot jump to finish second in the pole vault event.  Kate, who’s in Class IV, also placed fourth in the 300-meter hurdles, proving that the future is bright for the girls’ squad.

Milton travels to Andover for the NEPSTA Championships on Saturday, May 16.