My Summer? Playing Basketball in Russia 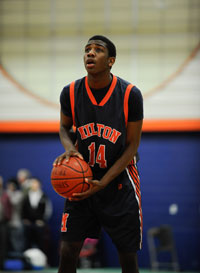 Ikemefuna “Ike” Ngwudo ’13 was one of 20 high school basketball players selected nationwide to play on a USA Basketball team for a two-week exchange program in Russia this summer. During the trip to Moscow and St. Petersburg, the student-athletes learned about Russian culture, attended basketball clinics, and played games with local athletes.

“The trip was an amazing experience,” said Ike. “It was exciting to visit all the historical sights and to meet so many Russian basketball players, including members of their national team.”

Ike says he learned a lot about the sport during their drills and games, where the teams were always a combination of Russian and American players.

“Americans play more athletic games, and the Russians play more skill-based games,” said Ike. “The Russian players like to move faster. They are less fancy in their moves, but they are more refined in technique. They get the job done.”

Ike also took home advice that Milton English faculty will be happy to hear. One of the Russian coaches taught the American players that reading and thinking about great works of literature can help players improve and develop their game. This coach cited the Iliad and its hero Achilles, making connections to an athlete’s Achilles tendon and how to protect this vulnerable area during certain basketball moves.

The U.S. Department of State’s Bureau of Educational and Cultural Affairs sponsored the exchange trip, in partnership with USA Basketball and the United States Embassy in Moscow. The athletes, ages 15 to 17, were hosted by the Russian Ministry of Sport, Tourism and Youth Policy and the Russian Basketball Federation.