Heyburn Speaker, Taylor Branch exhorts Milton students to use the lessons of the civil rights movement to create change 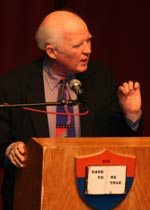 Taylor Branch, the prize-winning historian and chronicler of the United States civil rights movement and the Martin Luther King years, told students that he wrote history by telling stories. That way he avoids using the stock political labels that dominate public discussion—“fools’ gold” he called these terms—that we use as self-protection when we need to learn about something unknown and fearsome.

He began thinking about race when the topic represented both the unknown and the fearsome for his family and community in Atlanta, Georgia. Questions about race were “radioactive and dangerous,” he said. He resisted thinking about them but was at the same time intrigued. The event that broke though the emotional distance he had sought to maintain occurred in May, 1963, when the nation watched as police turned dogs and fire hoses on black children in Birmingham, Alabama. Children were the fulcrum of widespread and deep change, and the magnet that drew Taylor Branch to study, think, interview, and write his stories.

As this year’s Henry R. Heyburn ’39 Speaker in History, Mr. Branch proposed to Milton students that the lessons from that nonviolent movement, the powerful engine for change that it became, go beyond buses or race to citizenship today. Lessons from the movement, he argued, are vital to our future, to regaining health in our “out of joint” times.

The terror of living in those segregated times was greater and affected more people daily than any terror we in the United States experience today. Martin Luther King told the world that the nonviolent pursuit of freedom and equality would liberate whites as well as blacks, a prediction that Mr. Branch argued had proven true. Witness the economic growth of the South and the de-stigmatization of the white Southern politician, the steady growth of equality for women—who at that time were not admitted to many private colleges, could not serve on juries in 30 states, could not be ordained clerics—the reform of our immigration laws which had reserved 80 percent of our immigration slots to people from Germany, England and Ireland.

Mr. Branch argued that the spirit and purpose of the movement spread and was more alive outside the United States, even, than within. Organized nonviolence achieved successes such as bringing down the Berlin Wall and creating a multi-racial government in South Africa, for instance.

We have allowed, Mr. Branch asserted, certain myths to suppress the true power—the potential for miracles—that could be achieved in our time. The myth, for instance, that government is bad, or can only do bad things, is “pernicious and patently untrue,” he said. The notions that issues of race are either “solved” or “unsolvable” are also myths, both of which allow us to dismiss their consideration. “These myths suppress the potential for miracles,” he said.

“Creating democracy is a hard political process that demands vigorous study and risk,” he said. “Nonviolence is not marginal to democracy, because nonviolent action is the architecture of votes which ultimately yield structured consent. Violence, as a technique, is unstudied as an agent of democracy; it is un-thought about except to find its own justification. Organized violence destroys more but governs less. What we can consent to do by voting has greater power.

“Rather than being imprisoned in our myths, I recommend study of the movement, and its success as something vital to your future because it speaks to—does not abandon—your values. The greatest miracle of all is the fact that the movement was led by people who had never experienced freedom and yet had the unconditional grace to lift an entire country toward the meaning of its true values.”