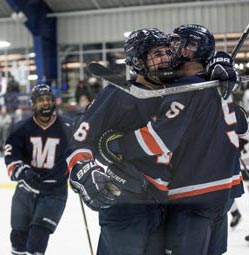 The boys’ hockey team capped off a remarkable season (19-5-2). Ranked in the top five of New England Prep Hockey all year, the team had an exciting home win against Noble and Greenough in their last game of the regular season (8-5). This win earned them a shared ISL championship title with Thayer Academy.

“The team is a really close group of guys, both on and off the ice,” says team captain Andrew Dumaresque (I). “Our depth of play is something we didn’t have last year. We have a lot of players who can score. And we have great goaltending by Ethan Domokos (II).” 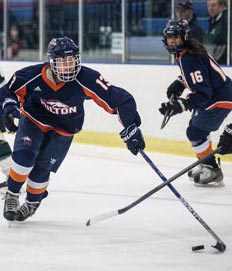 The girls’ team lost their game quarterfinal game against Williston-North Hampton (1-3), but it was their first playoff appearance in 15 years reflecting the continued growth of the girls’ hockey program. The team skated a solid season (16-11-0). The girls had some big wins over top 10 teams and received a top 10 ranking a few weeks ago in the HNIB Prep Divison I Poll.

Coach Ryan Stone says there was “great leadership” from Kelli Quinn (I), Anna DiGravio (I), Anne Malloy (I) and Maria DiMartinis (II) as well as “an influx of talented young players, including five freshmen who all played significant roles.”