Named to the PARADE All-American team

“Being named to one of the prestigious PARADE All-America team is a thrill and an honor” says Ashley Phillips ’04. Ashley plays goal for Milton’s varsity soccer team. Each All-American team features 40 of the top high school players in the country. 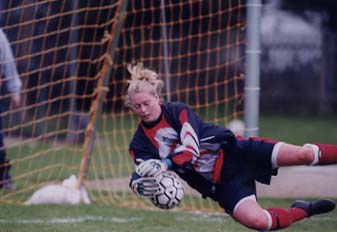 According to Milton coach Geoff Theobald, Ashley is a stellar goalkeeper. “Ashley’s PARADE All-America honor is well-deserved. She may be one of the best goalies the ISL league has ever seen.”

PARADE has been recognizing talented young athletes since 1957, when contributing editor Haskell Cohen asked coaches, scouts and recruiters to nominate the best high school basketball players in the country. The names of those chosen for the team were announced in an article in PARADE, and a tradition began. PARADE selected the first girls soccer team in 1993.
PARADE All-Americans not only have their name published in an article in PARADE, but they receive a lapel pin and a plaque, often presented by the sports editor of a PARADE distributing newspaper partner at a celebratory dinner.