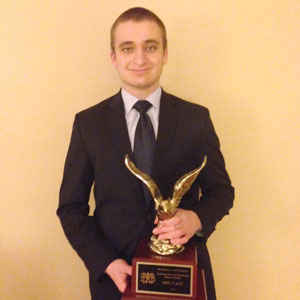 “This year, it all came together for me,” he says. “The competition was really close at the end; we went into round 10 in a three-way tie, but I felt really good about my performance.”

During extemporaneous speech events, competitors draw three topics from an envelope, choose one, and then have 30 minutes to prepare a seven-minute speech. At the forum, Marshall made five speeches on Saturday and five on Sunday. His topics ranged from how the Syrian civil war has been affected by increased tensions between Russia and Turkey (which Marshall says was one of his most challenging topics) to adopting the role of Supreme Court Justice Sotomayor in the Fisher v. University of Texas, Austin, affirmative action case. Marshall says the latter was his best speech of the tournament.

Marshall prepares for these events by practicing speaking twice a day, either on his own or with Speech Team coach and faculty member Susan Marianelli. He spends two to three hours a day reading up on a wide range of current events. Next up for Marshall is the Harvard National Forensics Tournament in February.