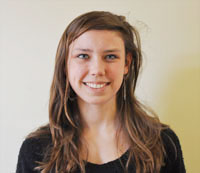 The wall on Victoria White’s (II) side of her room in Hathaway House is covered in not-your-average-teenage-girl décor.

“I have a big bulletin board where I collect poems that I like,” says Victoria. “I think I might drive my roommates crazy, because they have all these cool posters and I have a big wall of text!”

Always a strong writer at Milton, Victoria’s talent is being recognized nationally through numerous awards and accolades this year. She was one of 150 high school students chosen as a YoungArts National Finalist, where students are recognized for excellence in visual, literary and performing arts. She traveled to Miami in January to participate in the weeklong program that connects students with leaders and mentors in the arts.

“We met people there who spoke with us about making writing a career, and they showed us that it is something worth doing,” says Victoria. “They helped validate that goal for me, and now I believe it’s something I could legitimately do.”

In February, her poem “Oncology” won the Nancy Thorpe Poetry Contest and will be published in Cargoes, the Hollins University student annual literary magazine.

“The poem is about seeing someone who is sick, and being afraid for that person,” says Victoria. “I don’t usually draw upon personal experience in my writing, because that takes emotionally maturity, and I don’t feel that I have that yet. However, finding the words for that poem helped me find a way to talk about real experiences.”

The poem was also recognized with two of her short stories by the 2013 Scholastic Art & Writing Awards, the nation’s largest, longest-running, and most prestigious visual and literary arts program identifying the creative accomplishments of high school students. Victoria earned a Gold Medal in Poetry and also won Best in Grade, where only two writers and two visual artists from each grade are chosen from a national pool of applicants. She will travel to New York City in May for the National Awards Ceremony at Carnegie Hall.

This year Victoria is taking two English classes—Advanced Creative Writing and American Literature. She says her writing has “improved exponentially since freshman year because of the opportunities to share work and get feedback in classes. Milton places a lot of value on writing well.”

The bones are swimming to the surface
of your skin like fish.

I say this instead of the word
that hooks in my throat and would mean we can
no longer ignore this. I was not scared

until I saw your back, your shoulder blades nosing
the skin, rising for air.